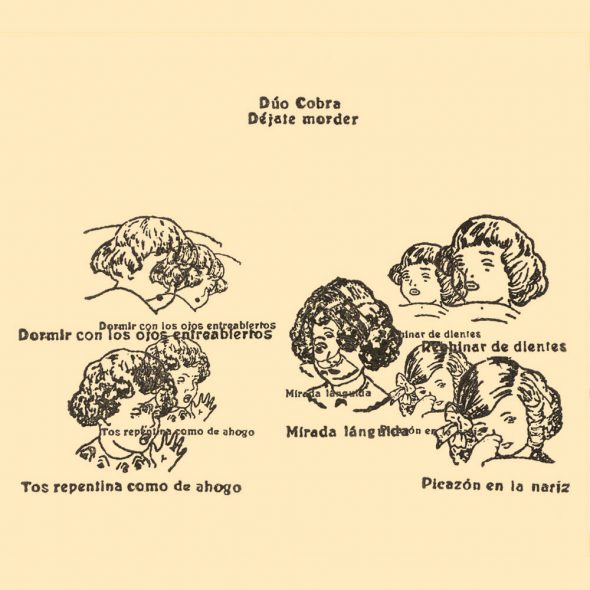 Outstanding, a must (…) GO David Giménez

‘Déjate morder’ is the debut album by one-of-a-kind band. Dúo Cobra are two allies against the weight of the machine, the mind and the soft metal: Experimental electroacoustics, generational folklor etc, guitars, small percussions, pianos, toys, voices, computers, synthesizers, mutant furbys and some of those little machines that go -Piiiiiiii. Poetry.

The songs and passages that we find in ‘Déjate morder’ go from folk to spoken word, through sound spaces and urgent suggestions, both own or appropriate. Ironies that paint landscapes on whispers and cross them out, just to face the glanders and the woe that sometimes comes out of our ears. More than a declaration of intentions, ‘Déjate morder’ is a marvelous album standing for the longevity of the missed power, an exercise with which to stop time and to amplify daily life small things before they resign to oblivion.

Dúo Cobra have composed, performed, recorded, produced, mixed and mastered all the music contained here but they have even made each of the numbered copies of CD with the love of their hands, including the die-cut photos in it. And there’s more! Each one of the songs in this album has its own video, directed by them of course. All of it, machined and executed in their studio, center of operations in Barcelona: La Follable.

A microcosm which floats somewhere between nude folk and spoken word

The human beign has no limits